Gov. Ron DeSantis on Thursday signed into law a measure that could make Florida ground zero for the testing of “autonomous vehicles” (AV) — self-driving cars.

“Signing this legislation paves the way for Florida to continue as a national leader in transportation innovation and technological advancement,” DeSantis said.

The bill (HB 311), sponsored by Republican state Rep. Jason Fischer of Jacksonville, defines autonomous vehicles as any car with hardware and software that make it capable of operating without a driver. Of prime importance, it makes it legal for autonomous vehicles to operate on Florida roads.

“This means Florida takes the pole position in the deployment of autonomous vehicles in the country,” said St. Pete’s GOP state Sen. Jeff Brandes, the bill’s sponsor in the Senate. “You’re going to see more and more companies coming here.”

The autonomous vehicle bill was one of the most lobbied issues during this year’s legislative session, having support from major players like Uber, Lyft, Google’s Waymo and General Motors. The Florida Chamber of Commerce also put its lobbying heft behind the bill.

“This would not be possible without the support from our staunch champions in the legislature, particularly the bill sponsors: Senator Brandes and Rep. Fischer,” said Tesla lobbyist Taylor Biehl. “Florida now leads the nation in AV technologies, while today’s signing only further demonstrates Florida’s unwavering commitment to an innovation economy.”

“Those companies were all looking for certainty and I think that’s what they really needed to advance,” Brandes said. He expects companies to begin announcing new projects and test programs within the coming months: “It’s right around the corner.”

The bill represents a capstone for both Brandes and Fischer who have for several years been sponsoring legislation to pave the way for an autonomous future in Florida.

The duo successfully sponsored legislation to create SunTrax in Lakeland, which serves as an autonomous vehicle testing ground. They also backed legislation allowing driverless cars on some roads, which allowed programs like the one in The Villages where a driverless shuttle operates on-demand service for residents. 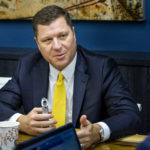 Brandes has long heralded the emergence of autonomous vehicles as a mobility solution that will help Florida cities provide better options for residents and visitors to get around. But it’s also a safety issue, he said.