Daniel Perez has locked up the race to lead the Florida House. He just now has to wait until 2024 — and hope that Republicans maintain control of the chamber — before taking the gavel.

In a text message obtained by Florida Politics, Perez’s chief rival for the position, Bradenton state Rep. Will Robinson, informed his House GOP freshmen colleagues that he was withdrawing from the race. Robinson wrote that he called Perez on Monday to commit his support of him.

Robinson said that was after he received the following promises from Perez:

That he “1) not be vindictive to anyone on the team but yet be inclusive, 2) allow members to get positions based on merit, and 3) personally would not make me violate my conservative principles.”

Sources close to both men insist that Robinson did not receive — nor did he ask for — a promise of a position within Perez’s leadership team.

Robinson said he “fought the good fight and just came up a bit short.”

There was speculation that the caucus was attempting to meet on June 30 to vote on a class leader. That’s no longer necessary, Robinson insists, telling his colleagues that he no longer saw “a need for a vote.” Instead, Robinson suggests Perez collect pledge cards.

What drove Robinson’s decision to concede now, say House members close to him, was his desire to see a unified caucus. He did not want to see the race extended to beyond November 2020 when he might have been in a stronger position because, possibly, some of Perez’s supporters will no longer be part of the caucus.

“He could have won,” said one member who was aligned with Robinson, “But at what cost?”

Florida Politics first reported in March that Perez had emerged as the front-runner to one day become Speaker. But caucus rules prevented Perez, Robinson, or any other member from publicly discussing the race.

In 2016, at the behest of then-Speaker Richard Corcoran and the incoming Speaker Jose Oliva, House Republicans reworked the rules for leadership races.

The new rules included a change requiring members to “serve at least one full session before directly or indirectly soliciting pledges of support.”

Still, a Florida Politics whip count of the caucus pegged the race at Perez up by at least two votes.

Despite some reporting from other media outlets (as well as some foolish speculation by a pro-Robinson blog), the race did not really shift during the 2019 Session.

Buttressing Perez’s campaign was the support of Southwest Florida’s James Buchanan, who took heat from local supporters to back Perez over Robinson.

Perez was first elected in a special election to fill the seat vacated when Jose Felix Diaz ran for the Florida Senate.

House District 116, which covers South Miami-Dade, including Doral, Kendall, Westchester and Fontainebleau. The area has about 96,000 registered voters, with more registered Republicans than Democrats, and has historically voted Republican.

During Perez’s first term, the Cuban-American introduced his first policy bill to the Legislature by calling himself a “Spanish Brad Pitt,” according to the Miami Herald

Perez’s redshirt advantage led many observers to peg him early-on as a possible Speaker candidate. At first, his top rival was thought to be Dover Rep. Lawrence McClure, who also won a 2017 special election. As it turned out, McClure became one of Perez’s most vocal backers.

“Danny’s consistently demonstrated steady leadership and an unwavering commitment to the success of each member of our class and I’m excited to serve with him and all of my fellow classmates,” said McClure after Robinson sent his text message conceding the race.

Here is a screen-grab of the text from Robinson to Perez. 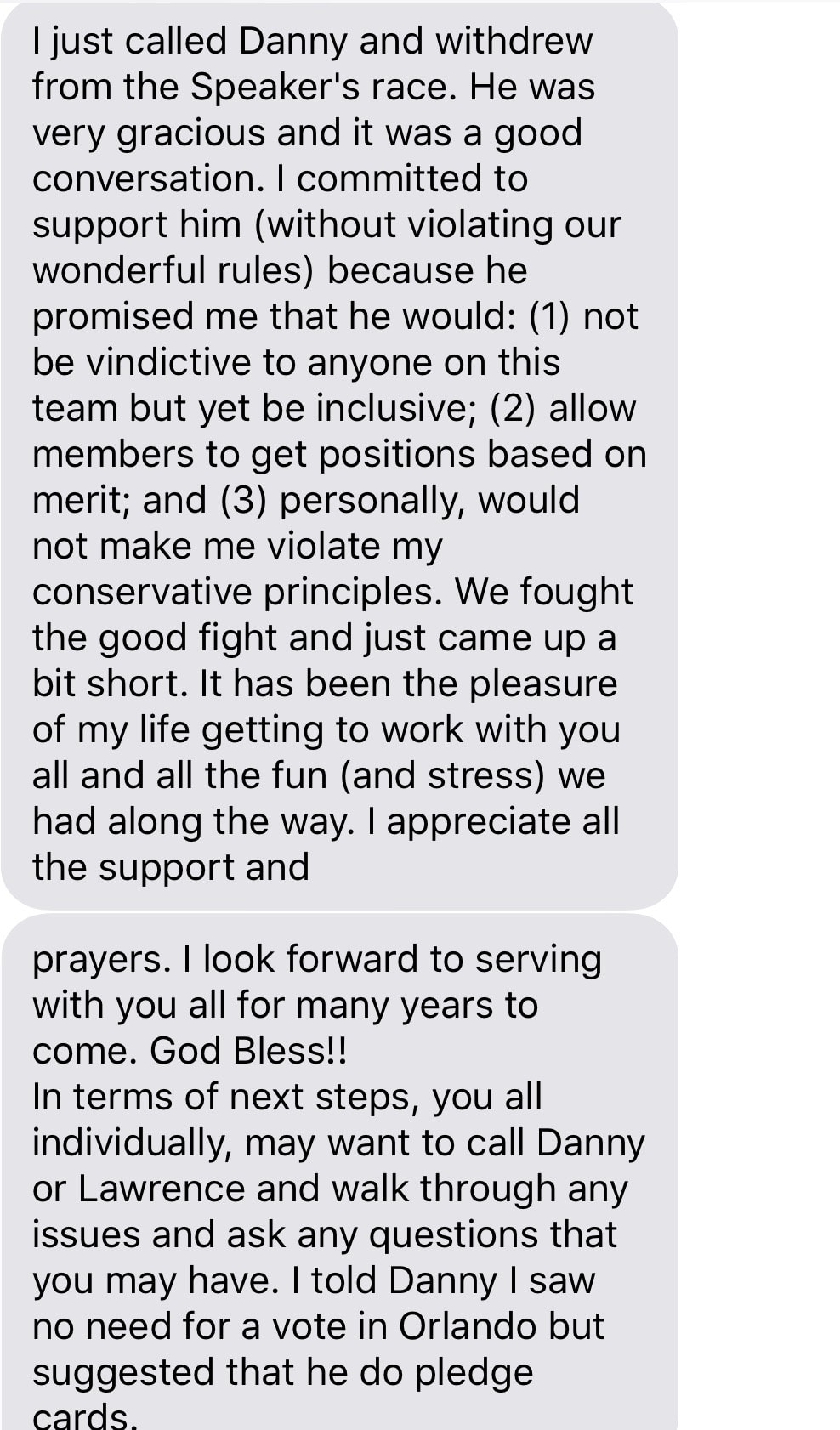 This story is developing; check back later.