President Donald Trump’s recent Twitter tirade that four progressive U.S. House Democrat women of color should “go back” to the “crime-infested places from which they came” has deservedly been called disgusting, and a lot worse.

Every time you think the occupant of the Oval Office has hit bottom, he digs down deeper.

We have lived through a lot in America – wars, the Great Depression, assassinations, slavery, and so on. But I never thought overt bigotry from the President of the United States would be an election strategy.

Here we are, though.

But, I don’t think he is doing this alone. This man also acts on whatever latest piece of advice he receives. I think someone got through to him that was time to bring the heat. Team Trump apparently believes the way to win is to make his supporters terrified that people of color want to destroy America.

When Trump says “go back” he’s sending a signal to his base that Alexandria Ocasio-Cortez of New York, Rashida Tlaib of Michigan and Ayanna S. Pressley of Massachusetts aren’t Americans.

Um, they were born here. Details.

The fourth Trump target, Ilhan Omar of Minnesota, emigrated from Somalia and is a naturalized citizen of the United States – just like Melania Trump.

Trump can’t just say that disagrees with their political positions. He lobs racist attacks, so his mostly-white base will know that he still has their back. Then he acts stunned when opponents call it racist. That has been his game plan since he rode down the escalator in New York to announce his candidacy.

Actually, it went back even further. Trump was one of the foremost spreaders of the racist fertilizer known as the birther movement about President Barack Obama. He doubled down on that after Charlottesville.

He is just following a script that got him the White House. The ones who whisper in his ear tell him he is doing the right thing, and that’s all the justification he needs. It certainly doesn’t seem to hurt his fund-raising, either.

In his mind, anyone who questions him hates America. He believes he is imperial, and his staff and supporters back that up. When asked about the tweets regarding the four congresswomen, Kellyanne Conway asked the reporter, “What’s your ethnicity?”

Rudy Giuliani chimed in that since Democrats won’t condemn the four women in question for their “hateful and ignorant criticism of our law enforcement and federal agents,” Trump has to do it for them. 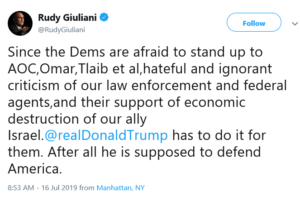 See how this works?

Say whatever you want, no matter how racially incendiary, and then blame the other side. Trump tweeted Tuesday, “Those Tweets were NOT Racist. I don’t have a Racist bone in my body!” 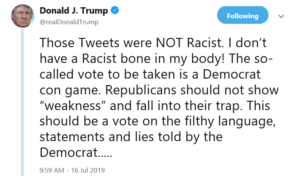 You could almost hear his supporters say, “Yeah, that settles it.”

Everyone else should know better. Telling people of color to “go back” to the “crime-infested places” they came from is more than a dog whistle. It’s a dog bullhorn. It tells those who believe anyone who doesn’t look, talk, or believe as they do is coming for them.

Donald Trump, the President of the United States, knew exactly what he was saying.