Here’s a brief update on how Florida’s U.S. senators reacted to President Donald Trump’s racially charged tweets about U.S. Rep. Elijah Cummings. Rick Scott dodged the question in an interview on Meet The Press, and Marco Rubio posted a Bible verse from the Gospel of Luke. 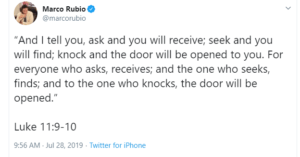 Neither man called out the blabbering flame-thrower in the White House. They basically looked the other way. That’s not exactly profiles in courage. Raise your hand if you’re surprised.

Early in the interview Sunday morning with Todd, Scott said, “Look, I think we’ve got to do everything we can to bring this country back together …”

To which Todd replied, “Why doesn’t the president think that? Why do you think the president — doing this, it’s just stoking racial resentment, left and right. He’s done it multiple times this month alone. He obviously thinks this is good politics inside the Republican Party. Do you think it’s good politics inside the Republican Party?”

I’m not sure asking about politics is the right question to ask. Trump is not going to change.

But denigrating Cummings for his aggressive questioning of acting Homeland Security Secretary Kevin McAleenan over conditions where migrant children are being held should have earned a rebuke from multiple high-profile Republican members of Congress. It would have had an impact.

Surely, you remember the exchange.

Cummings: “You feel like you’re doing a great job, right?”

As usual, Trump, tried to change the narrative by attacking Cummings, tweeting that he is a “brutal bully.” 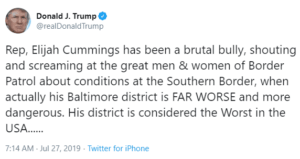 Well, that’s Trump. As an aside, have you noticed how he tends to attack opponents by labeling them with insulting traits that he exhibits daily? Cummings is the bully? Trump perfected the art of the bully.

That brings us back to Florida’s United States senators.

Scott tap-danced around the questions about Trump’s tweetstorm with this exchange.

Scott: “Well, Chuck, let’s look at what he said, all right, and why he did it. Congressman Cummings sat there and attacked our Border Patrol agents, all right? This is, this reminds me of what happened to soldiers coming back from Vietnam.”

Todd: “But that justifies a racial resentment tweet in response? Is that presidential leadership?”

Scott: “Well, look, I, I, look, I didn’t do the tweets, Chuck. I can’t talk about why he did what he did. But I’m very disappointed in the people, like Congressman Cummings, who is attacking Border Patrol agents that are trying to do their job, when the Democrats won’t give them the resources to do it.”

See what happened here? Scott could have said, “You know Chuck, that was completely inappropriate and disappointing by the President.”

Instead, Scott stammered around long enough until he found a way to blame Cummings and Democrats. A basic sense of decency was not part of the equation. It hasn’t taken Scott long to learn the ways of Washington.

That’s worthwhile advice. Rubio and Scott have the platform to make a difference and seek solutions. People are aching for someone to do that. Rubio had a chance to step up recently when Trump denounced four congresswomen of color but passed. He is doing it again.

Why can’t he just say it, and denounce this president for divisive and racial rants like the latest one? We all know what’s going on. Trump is cynically using race to divide, bully, label, and it’s damaging the nation. Rubio wants to be a moral leader while hiding in the shadow of a bully. You can’t do both.

One day, hopefully, a Republican leader will say just that.