In a Friday memo released to news media, Robert Tornillo proposed language for the July 25 Cabinet meeting to discuss “potential candidates for appointment to interim commissioner and process for permanent replacement.”

“This matter is subject to intense media scrutiny, with some members of the media openly questioning whether the (previous) notice is sufficient,” Tornillo wrote.

Former Gov. Rick Scott and Cabinet members overhauled the process used to hire, evaluate and fire agency heads after controversy over Scott’s ouster of then-Florida Department of Law Enforcement Commissioner Gerry Bailey in 2014. Bailey held one of a few state jobs that the governor and Cabinet must agree to replace. That list includes the head of OFR.

The changes came after Scott and the Cabinet settled a lawsuit filed by filed by St. Petersburg attorney Matthew Weidner, news media organizations and others over Bailey’s termination.

Terms of the agreement include “requiring new Cabinet-level hires to be publicly vetted, requiring that Cabinet staff undergo annual open-records law training and requiring that all Cabinet-aide meetings be broadcast online,” the News Service reported.

“The settlement also would require that all communications regarding Cabinet agenda items be conducted in writing or during open meetings and that (the Governor), Cabinet and senior staff members forward to state email accounts all public records that have been sent and distributed from their private email accounts.”

Rubin was suspended after a woman employee complained of sexual harassment, which Rubin denied. The nub of the complaint had to do with a lunch meeting in which Rubin made offhand sexually related comments and invited her to see his condo. Other unrelated complaints of inappropriate comments followed.

Rubin has said Patronis is trying to force him out because he refused to accede to the CFO’s push to hire Kim Grippa, a politically connected lawyer and ex-wife of Tony Grippa, an insurance executive and former Leon County Commissioner.

Since then, the OFR inspector general’s office released a summary of findings it says prove that Rubin violated policies against harassment and misconduct, including alleged comments on a sex-watching canine, bowtie-wearers and Rubin’s parents’ fertility.

As of midday Friday, DeSantis’ office had not yet commented on Tornillo’s memo, reproduced below. 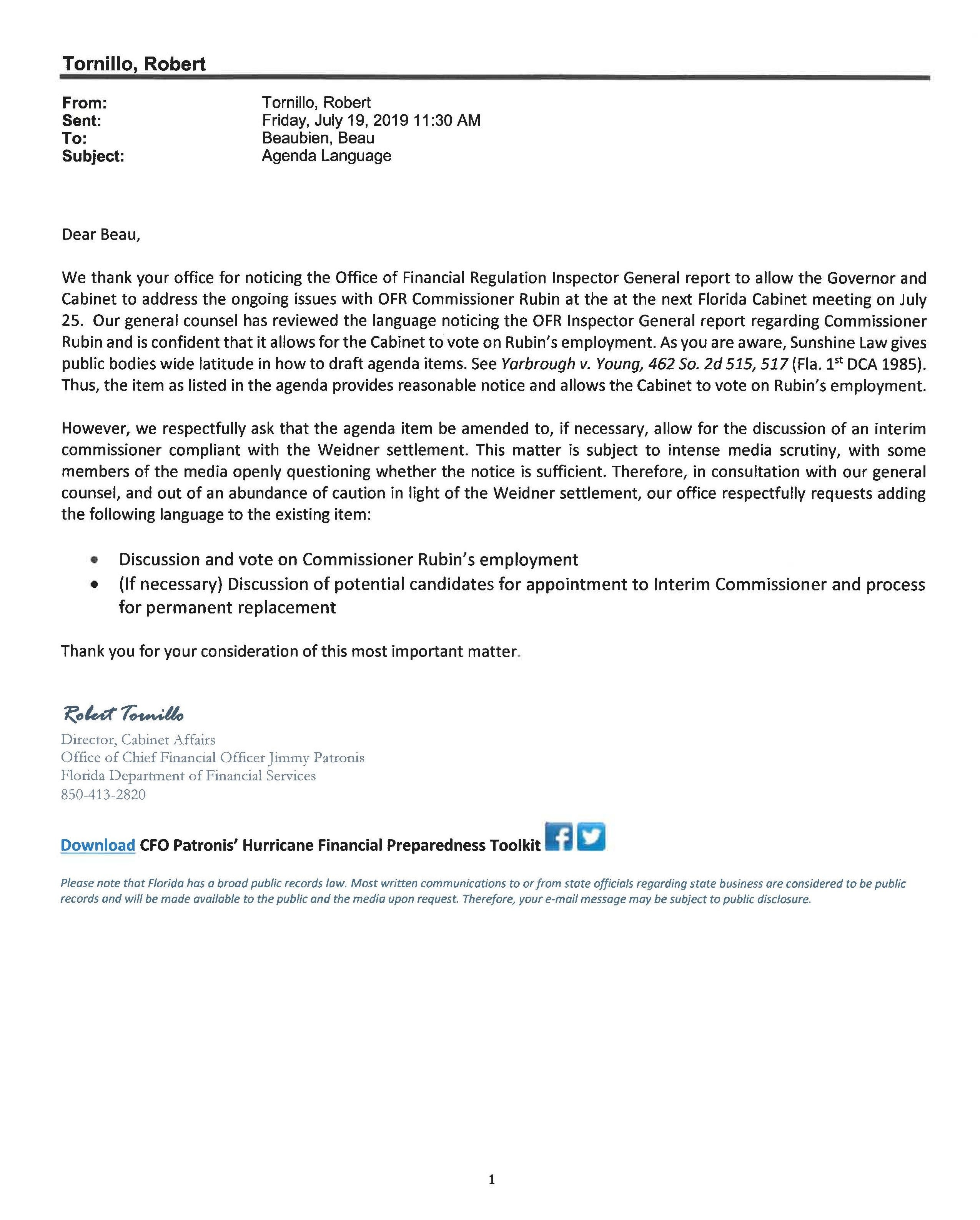