The big local news of the week — first reported by Florida Politics. 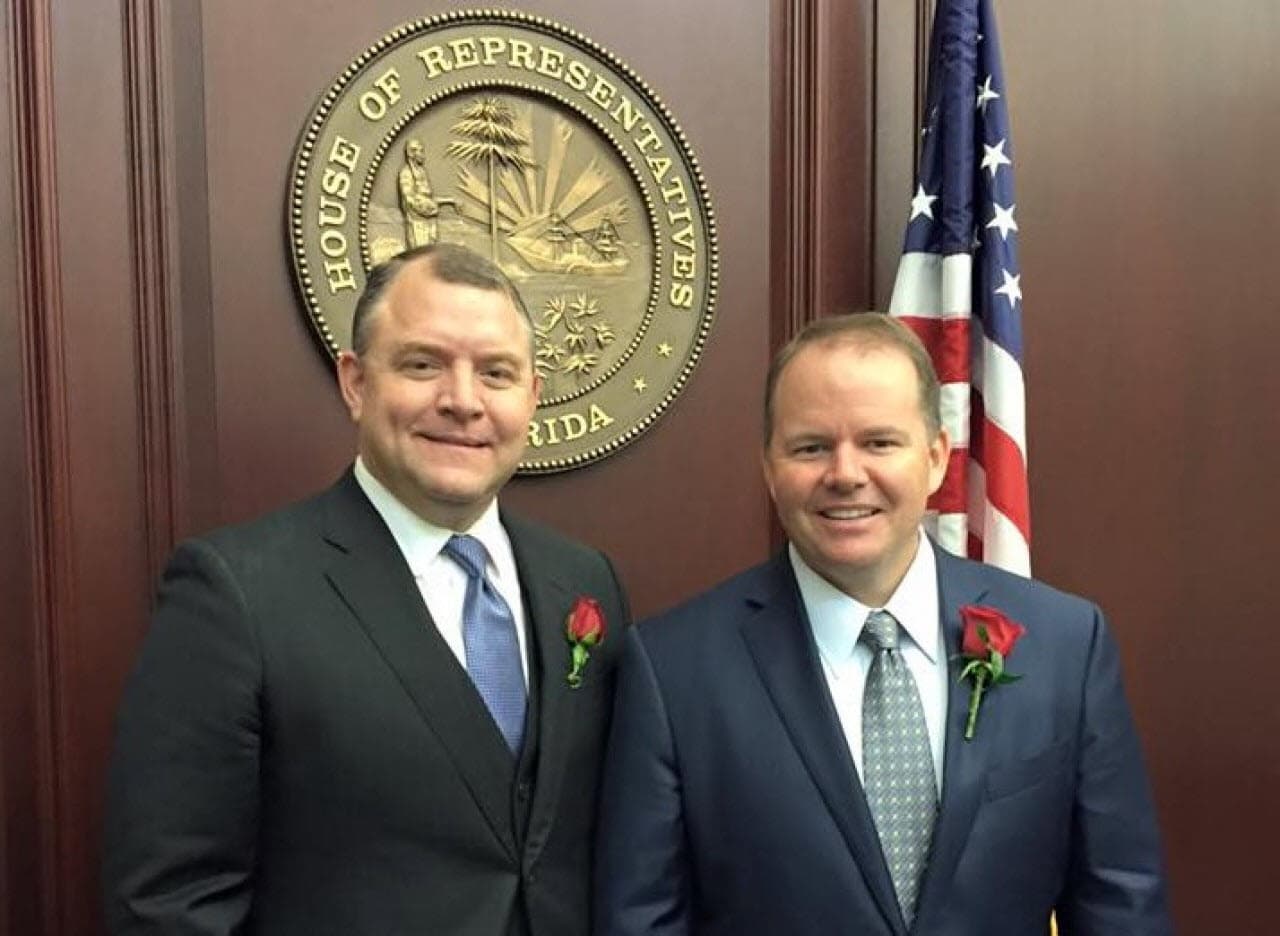 Dynamic Duo to leave Tallahassee at the same time after all.

The current Senator’s wife, Jen Bradley, will run instead.

“The hardworking people of Clay County have been incredibly generous to my family and me, and I couldn’t be more grateful for the 18 years of unwavering support,” Cummings said to Florida Politics.

As we enter the last year with Bradley and Cummings as budget chairs of their respective chambers, it’s interesting to think about the unique convergence and window of opportunity.

Northeast Florida won’t have the budget chairs after 2020. Sen. Jen Bradley and Rep. Sam Garrison (the current Senator’s law partner) won’t have seniority. While Duval representatives will be moving closer to their eight-year mark, the reality is that all bets have to be on 2020 for this region.

The national economy … who knows what it will do? But we have gone a while since a traditional correction, and indicator after indicator is flashing red.

Jacksonville was able to overplay its hand in the Gov. Rick Scott era in a way that doesn’t seem possible under the incumbent (despite strong local ties).

That $8 million workforce housing project John Rood was going to develop downtown … Ron DeSantis made a point of explaining his reasons for vetoing it.

Scott would have helped a friend out, possibly. DeSantis vetoing a Republican member project pushed by a Republican City Hall, well, was provocative.

Jacksonville Mayor Lenny Curry loves football, and he knows as well as anyone that halftime is over.

There need to be aggressive plays made for the 2020 Session, or otherwise, an opportunity will wane.

A release from the office of Sen. Marco Rubio this week had good news for Duval and Clay counties.

Out of $37.1 million for Hurricane Irma recovery, two significant disbursals for the region.

Duval got $5.8 million for debris removal, and Clay County got $1.9 million. 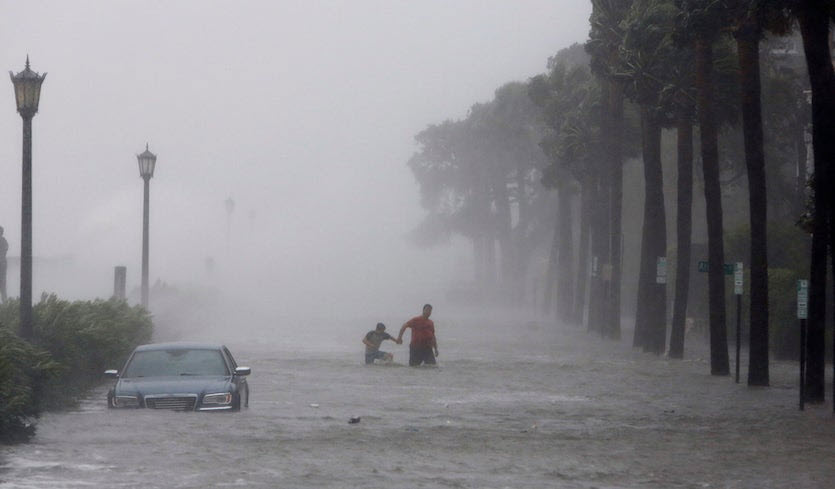 While neither government faced a crisis because of the slow rate of reimbursement, unlike some Panhandle counties hit by 2018’s Hurricane Michael, the money helps just in time for new budget years.

“Nearly two years later, communities across the state of Florida are still struggling to fully restore their communities from the devastation caused by Hurricane Irma,” Rubio said. “I am glad to see these much-needed funds from FEMA heading to our communities to assist in their recovery efforts.”

In Jacksonville weeks back, CFO Jimmy Patronis described his own frustration with the slow reimbursement process.

An optimistic read is that Florida’s agitations are working; realistically, however, FEMA can take up to five years to reimburse after storms. 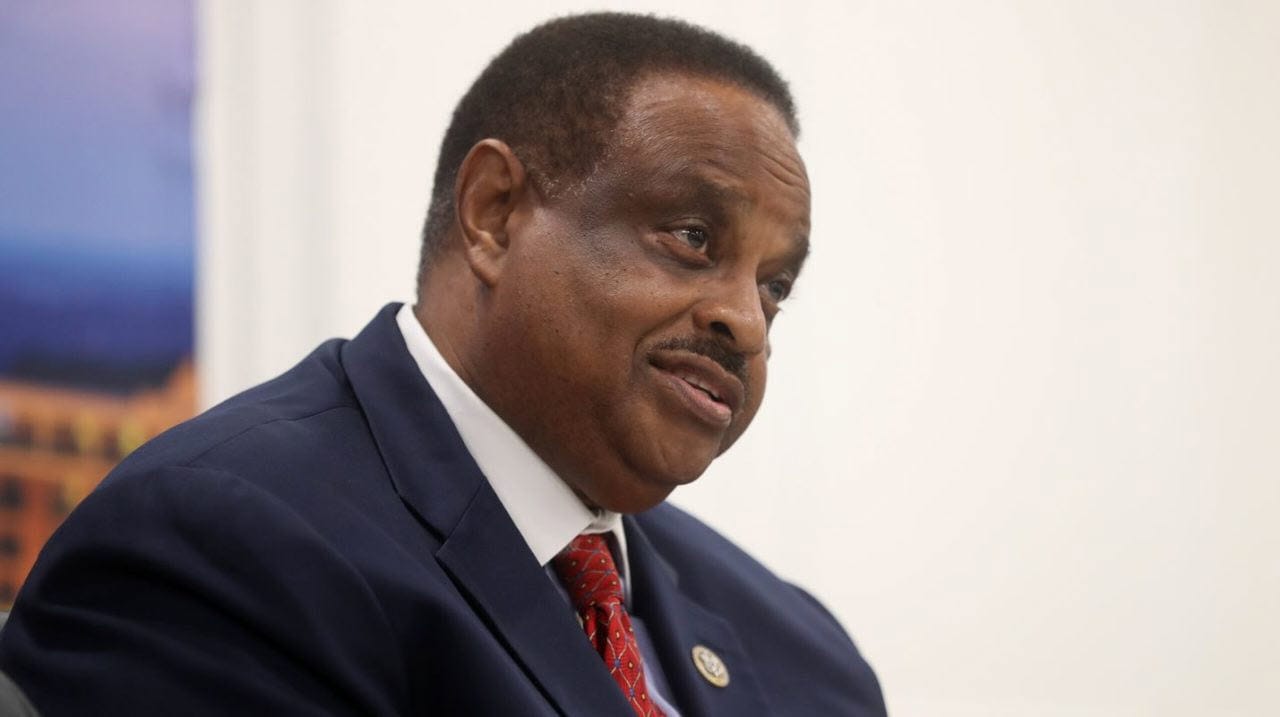 — A year of payment forgiveness for recent college graduates.

— A bill to establish a federal escrow account for first-time homebuyers.

“Too many Americans are hamstrung by student debt or denied the cornerstone of wealth-building through homeownership and lack retirement security,” said Lawson, who serves on the U.S. House Committee on Financial Services.

“As the program is currently operating, the Social Security Trust Fund will be depleted by 2034 — leaving millions of disabled workers, retirees and children without a firm financial foundation. My Economic Affordability Plan remedies these fundamental flaws and allows citizens to achieve the American dream,” Lawson said.

The Florida Times-Union has become the go-to for Duval County School Board members looking to drop dimes on Jacksonville City Hall, and reporter Chris Hong had a provocative piece this week.

School Board member Warren Jones (no political neophyte, as he served for close to a quarter-century on Jacksonville City Council) said that a phone call from Sam Mousa, the city’s chief administrative officer, “blew [him] away.” 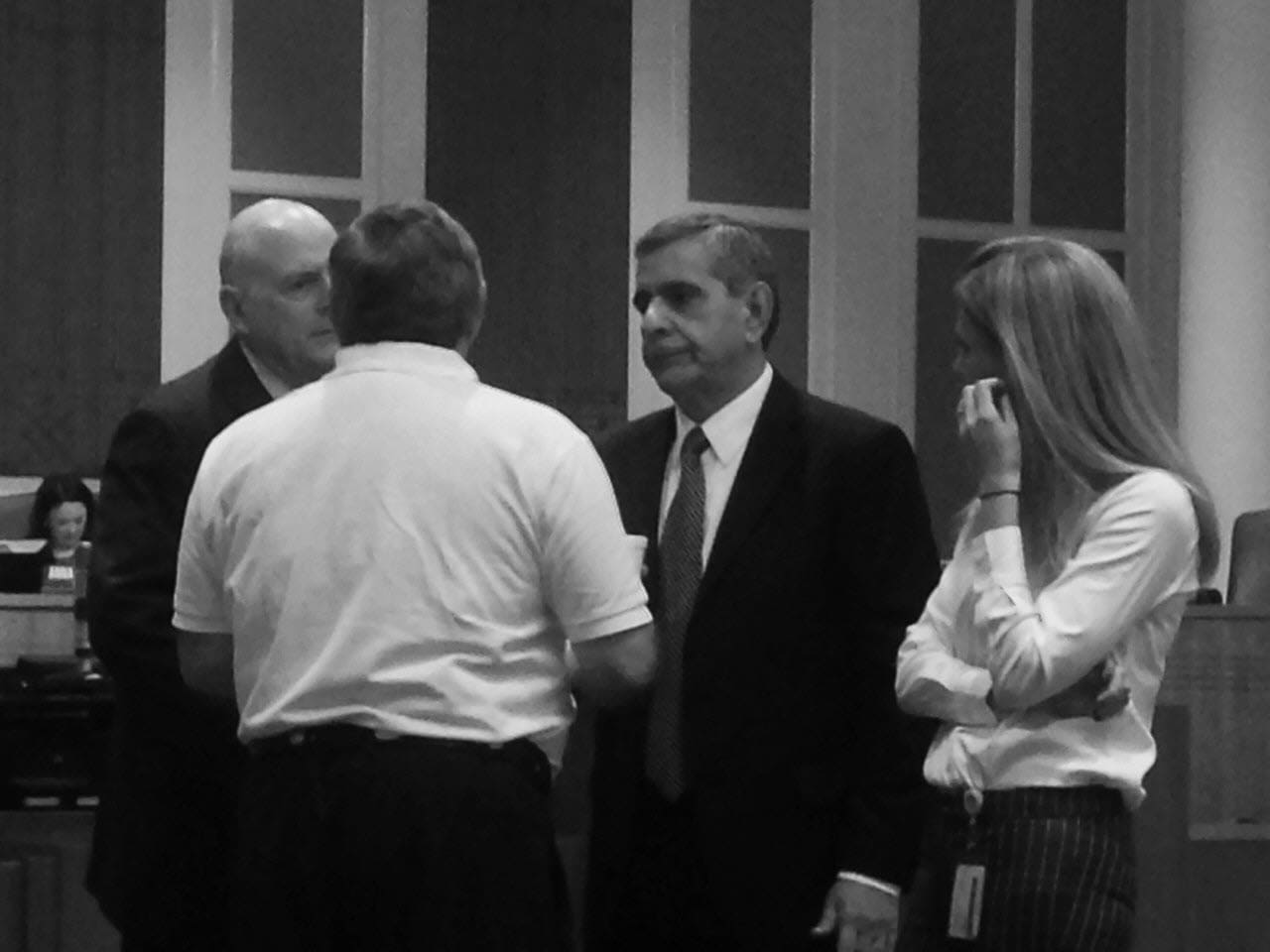 Sam Mousa in the middle, in City Hall and afterward.

Mousa was pretty direct: Charter Schools would have to get $150 million “off the top” of any tax referendum effort.

School Board members want a referendum this year. November seems to be a lost cause, but there is still some appetite for December.

The Mousa plan involved a November 2020 target date and would have seen him working with consultant Tim Baker to seal the deal.

The Jax Daily Record was on the scene Tuesday for a discussion of Northeast Florida’s transportation future. 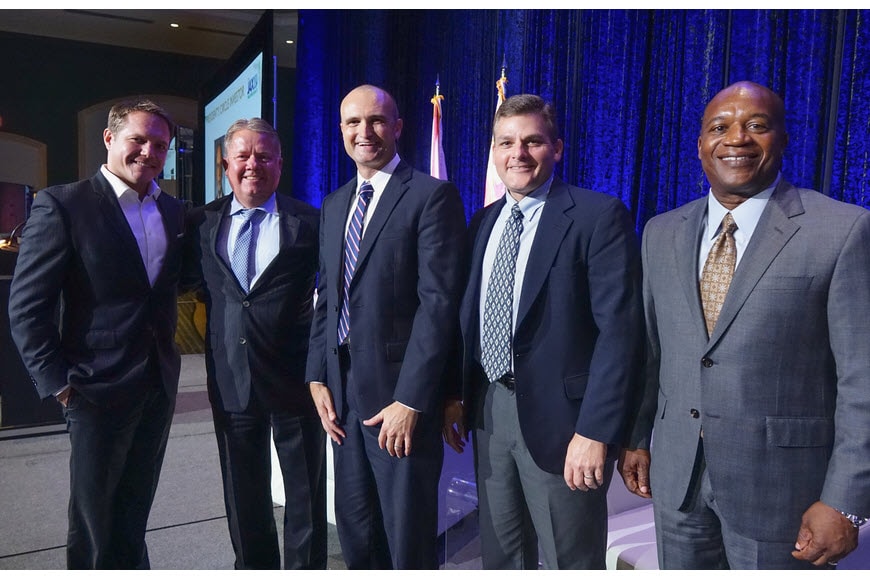 Data mapping is generally significant for the TPO, and local utility JEA also is getting “smart,” using “augmented operational intelligence software to track water and sewer flows to limit the number of overflows in storm conditions that can affect transportation infrastructure.”

JTA’s autonomous vehicle pilot: also a “smart” technology, with the agency feeding data to the federal government as AVs become more a norm than a novelty.

In short, national eyes will be on what is called the Bay Street Innovation Corridor, soon to be a showpiece for the region.

That’s the message JEA CEO Aaron Zahn delivered to WJXT’s Jim Piggott regarding a potential sale of the utility this week.

“I think the first point is that there is no foregone conclusion. We’re still continuing our scenario strategic planning. That said, what the board has authorized us to do is evaluate all the different constructs of JEA,” he said. 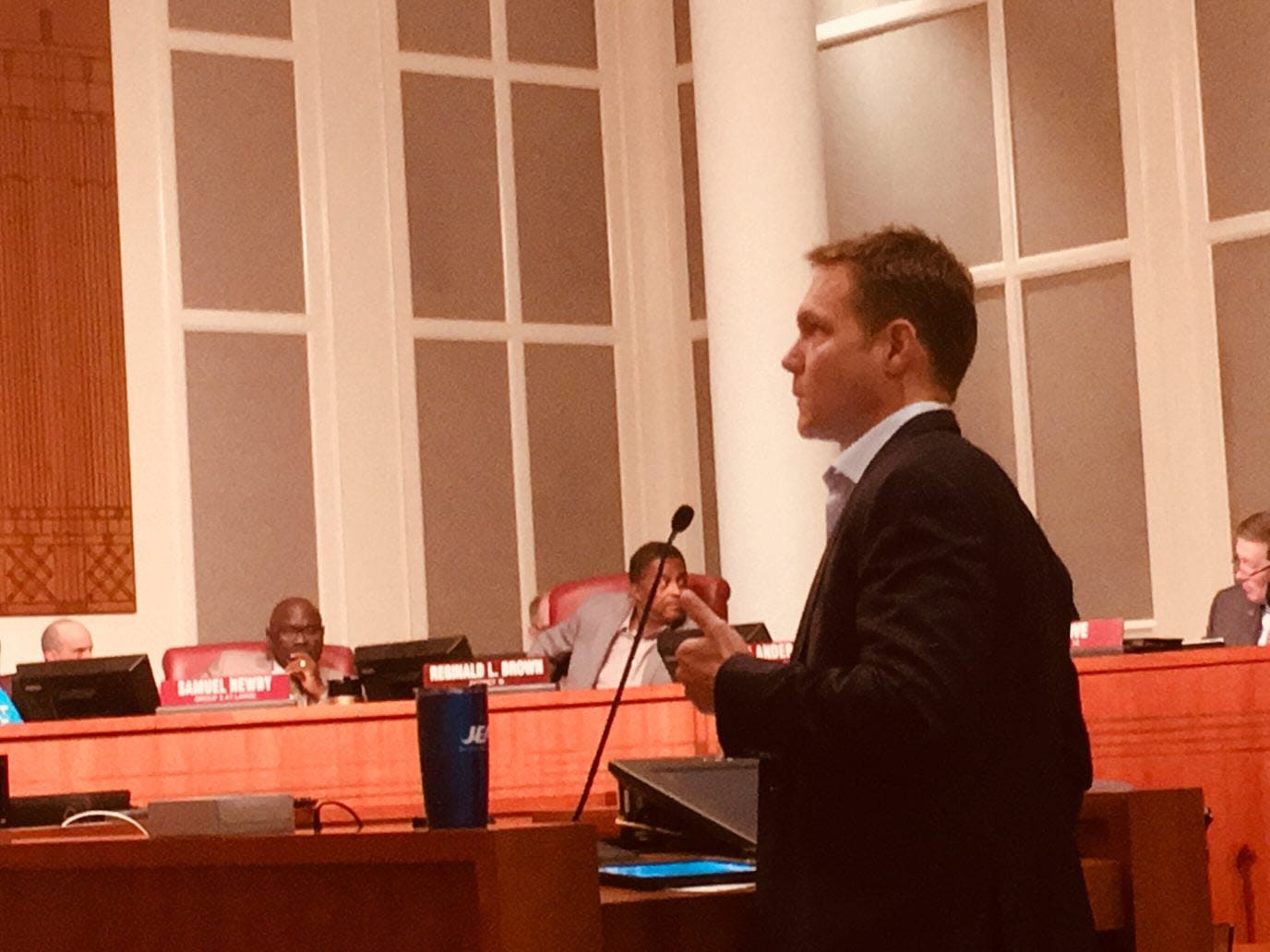 Zahn wants “an open-minded conversation about the future of JEA and how we remain relevant to all of our customers.”

“At the end of the day, if you look at our May board meeting and you understand the issues that we’re facing related to distributed generation and electrification and even distributed water systems, our business has changed to a competitive market environment. And so all we’re doing is having a very open and transparent conversation about what the potential futures of JEA might be,” Zahn said.

The CEO is the highest-paid city employee, with a $520,000 a year base salary and benefits.

Former Jacksonville City Councilwoman Katrina Brown’s fraud trial starts later this month. But the dramatic twists have yet to stop.

The latest: Brown wants to represent herself. 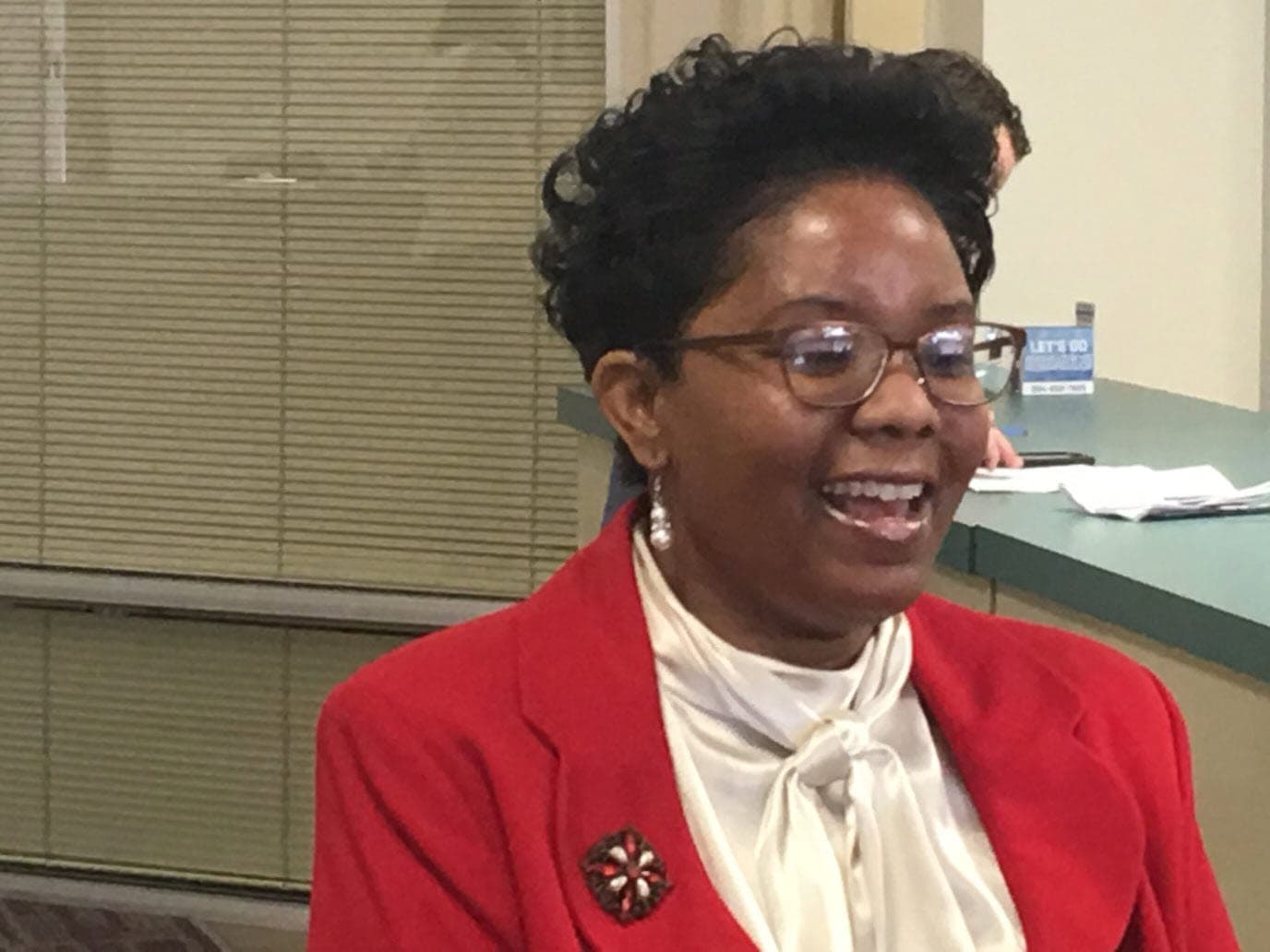 Attorney-client privilege may be no issue for Katrina Brown this month.

Those who recall the Corrine Brown trial, in which the former Congresswoman was her own primary witness, know there are risks to the “one-woman show” approach.

Katrina Brown has no legal training and likely would struggle to keep up with federal attorneys Michael Coolican and Tysen Duva: the same crew that defeated the Congresswoman.

One of the more interesting downtown-centric items in Jacksonville’s Capital Improvement Plan: a proposal of $5 million of city funds to match $5 million for The Florida Theater. 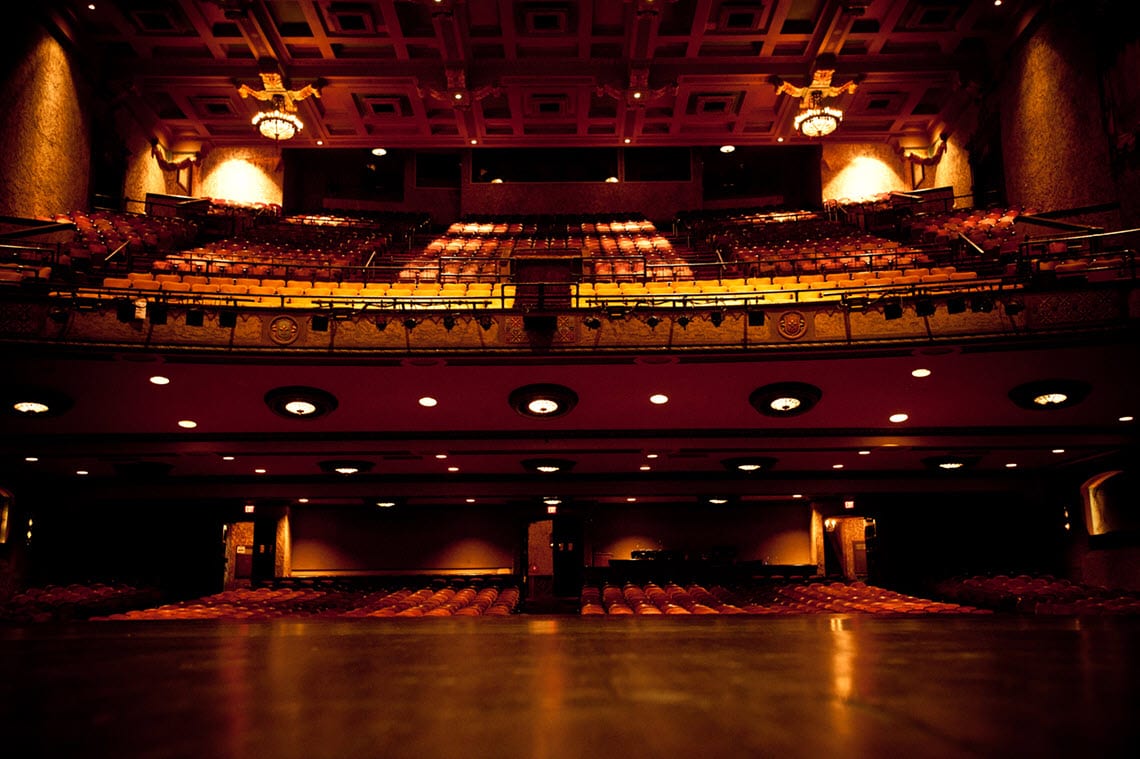 Renovations are coming for a Jacksonville landmark.

Per the Jax Daily Record, the money would be programmed over the next five years, “pretty much everything except the bricks and mortar.”

Targeted for upgrades: “restrooms and HVAC as well as the theater’s sound system, lights and film projector.”

The lobby’s getting upgrades also, but the best news?

The Florida Theatre has lobbied for renovation dollars for years. Now it has them.

The wife of Clay County Sheriff Darryl Daniels has filed for divorce — a seeming result of months of coverage of an affair gone wrong for the first-term Republican. 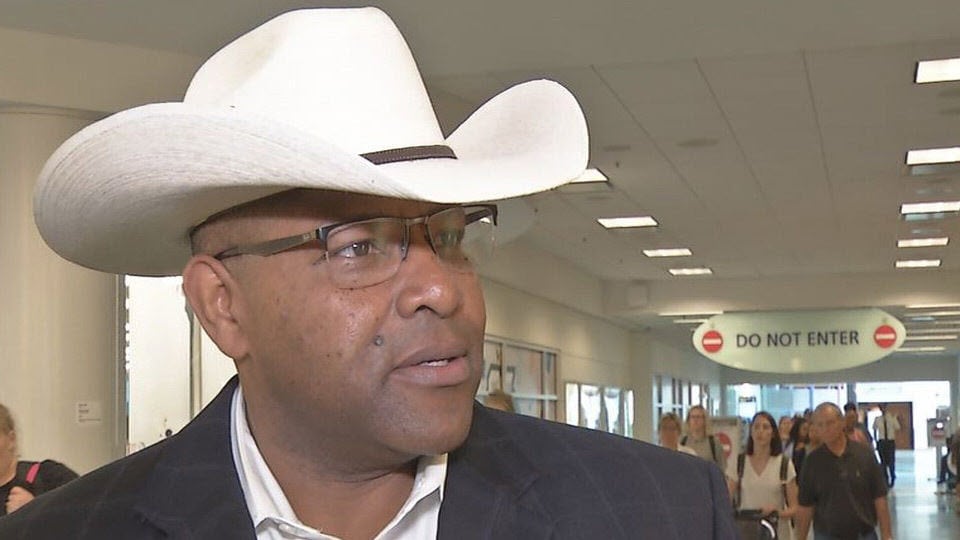 Another bad news cycle for the Sheriff.

Daniels’ wife, Denise, is claiming indigence in her filing. She asserts the marriage is irretrievably broken.

This is the latest negative development for Daniels, a charismatic Republican Sheriff who was a regional campaign surrogate for DeSantis.

Daniels is currently under FDLE investigation. Though DeSantis has (thus far) not made a move to suspend Daniels, Clay County lawmakers Sen. Bradley and Rep. Cummings have “major concerns” over the allegations.

The issue at hand: Daniels ordered the apprehension of his lover and former workplace subordinate, Cierra Smith.

Medical marijuana patients in Nassau County have a new option: Trulieve opened its latest dispensary in Fernandina Beach this week. 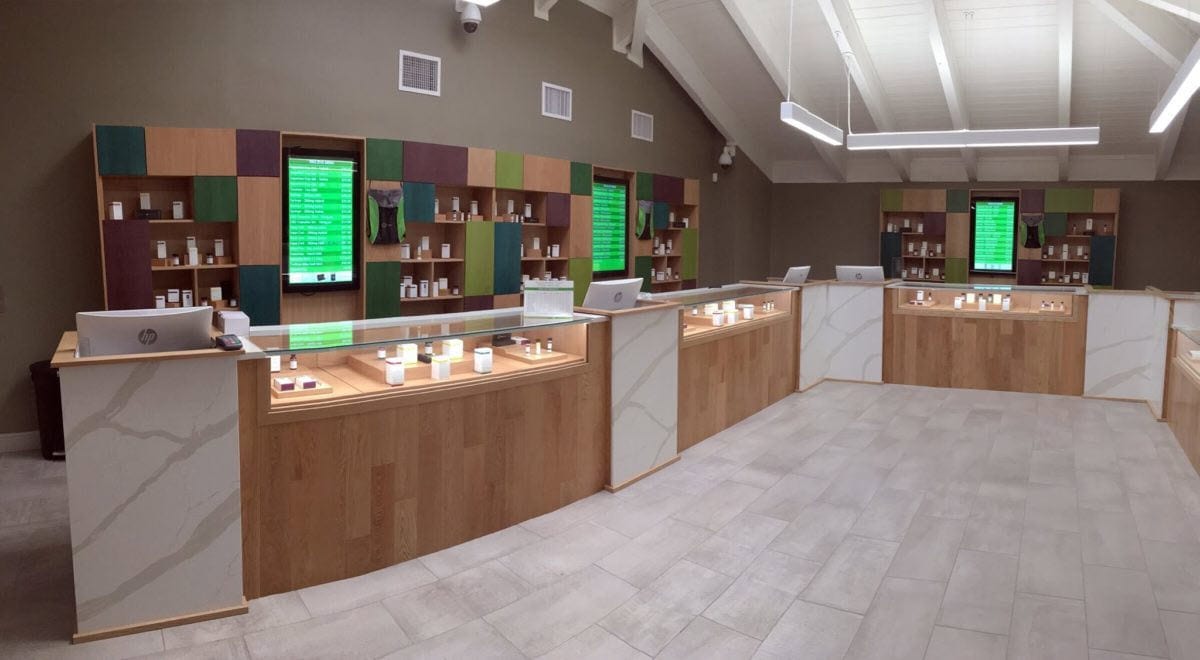 Fernandina Beach is now home to a Trulieve.

This is the company’s 30th dispensary in the state, giving it more market share than any competitor has.

“Opening our latest storefront in Fernandina Beach is an opportunity we’re thrilled about,” said Kim Rivers, Trulieve CEO. “Not only is it our 30th location, bringing expanded access to patients inside Nassau County and throughout Northeast Florida is something we’re excited to be able to do.”

“Our focus at Trulieve is — and always will be — ensuring patients have direct, safe access to the high quality, effective, and natural medication they’ve come to rely on. Whether it’s offering patients a space to learn more about cannabis as medicine or bringing a storefront to patients that may not have been able to make it into a store before, we’re eager to offer a new level of support for our patients in the area,” Rivers added.

UF Health on the rise

The organization also acknowledged the hospital for high-quality patient care in two other vital areas. 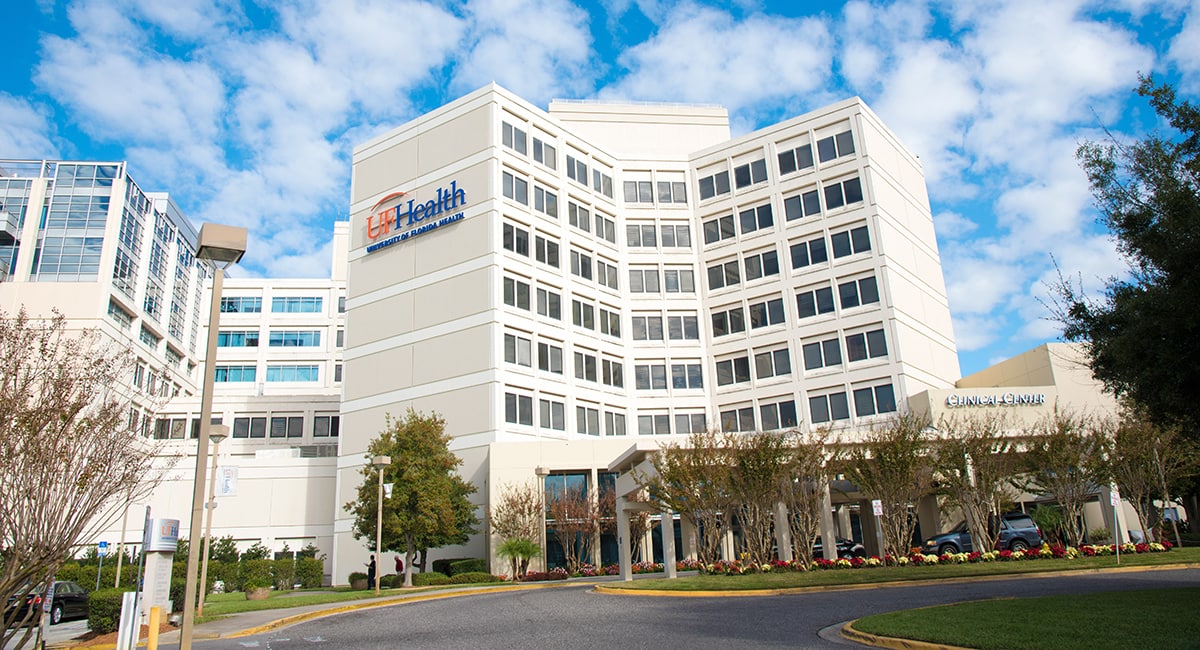 UF Health Jacksonville is on the rise in rankings for patient care.

UF’s oral and maxillofacial surgery program was ranked 41st nationally, and its nephrology program was ranked 45th. Also singled out for high performance: The specialty of neurology/neurosurgery and in the care of patients with chronic obstructive pulmonary disease, or COPD and heart failure.

“Our No. 1 goal as an organization is to keep getting better in patient care, and these latest rankings show we continue to move in the right direction,” said Leon L. Haley Jr., M.D., MHSA, CEO of UF Health Jacksonville and dean of the University of Florida College of Medicine — Jacksonville. “These recognitions exemplify our dedication to this community. I could not be prouder of the hard work and dedication from every one of our employees.”

Also, UF Health Jacksonville increased its overall ranking among local and state hospitals, jumping from 22nd to 16th in Florida and from fourth to third in the Jacksonville region.

The improvement in UF Health Jacksonville’s rankings with U.S. News & World Report follows other barometers that highlight the organization’s continuous advancement. Earlier this year, UF Health Jacksonville was ranked one of the top 250 hospitals nationwide, or top 5 percent, in overall clinical excellence by Healthgrades, a national organization that analyzes the performance of hospitals across the country.

NFL Network is in the process of ranking the top 100 players. Two Jaguars are on that list.

Since he came into the league in 2016, few would argue that All-Pro cornerback Jalen Ramsey has been the team’s best player. Ramsey comes in at number 27. 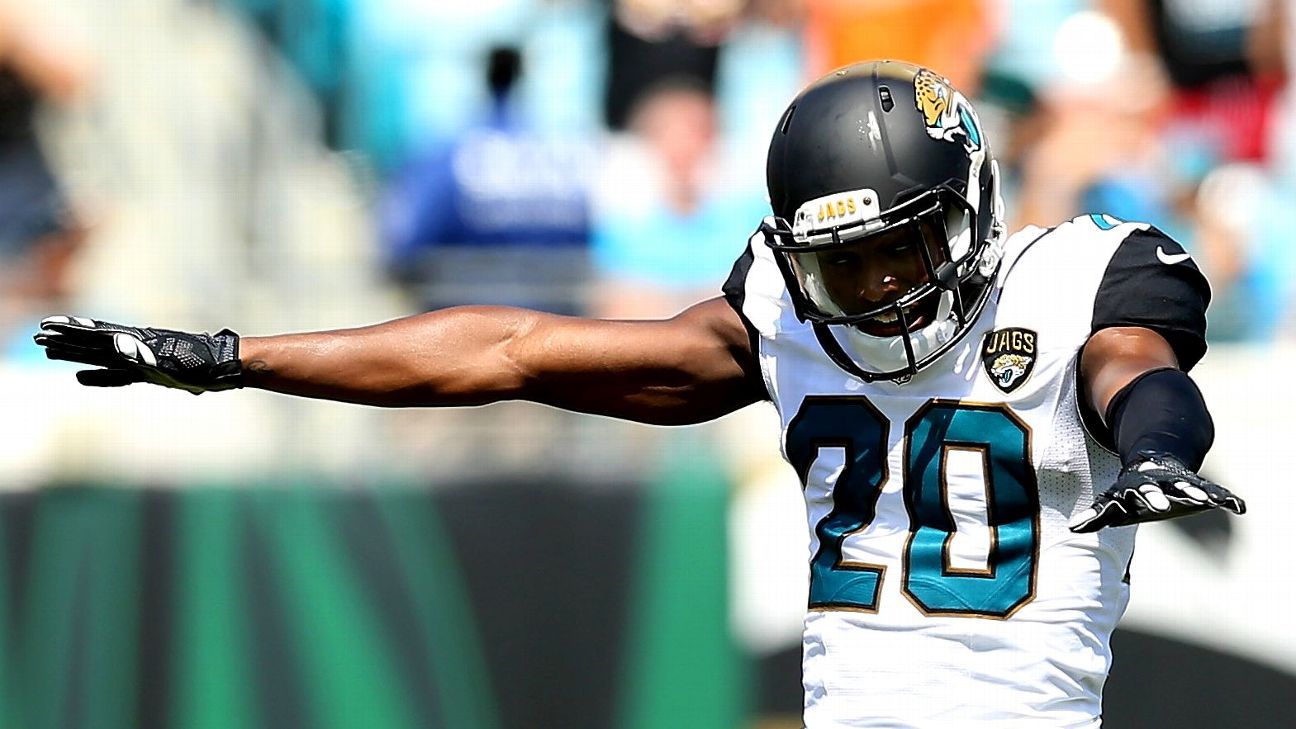 All-Pro cornerback Jalen Ramsey has been the Jaguars’ best player He comes in at No. 27 in the Top 100 ranking by the NFL Network.

Ramsey, the fifth overall selection in 2016, intercepted three passes last year and broke up another 13. His interception in the end zone against Pittsburgh’s Ben Roethlisberger shows why he is ranked so high.

The only other Jacksonville player to make the top 100 is defensive end Calais Campbell, who is ranked number 54. Campbell had 10.5 sacks last year and 25 in the two seasons playing for the Jaguars.

Both players slipped a notch in the rankings this year. In 2018, Ramsey was ranked number 17 on the list, while Campbell was at 14.

The list represents numbers 11 through 100 with the top 10 to be released in the coming days. No Jaguars player is expected to be among those.

Both are making strong showings during the early days of training camp. Ramsey had a strong day during a midweek practice that focused on goal line coverage by breaking up four passes.

Campbell says he and his Jaguars teammates are ready to go in 2019.

“They’re working hard trying to earn back that respect that we once had, and I think that comes from just the daily grind and you can see the guys that have been working really hard and very much inspiring,” he told the media last week. “We’re an inspired team right now.”