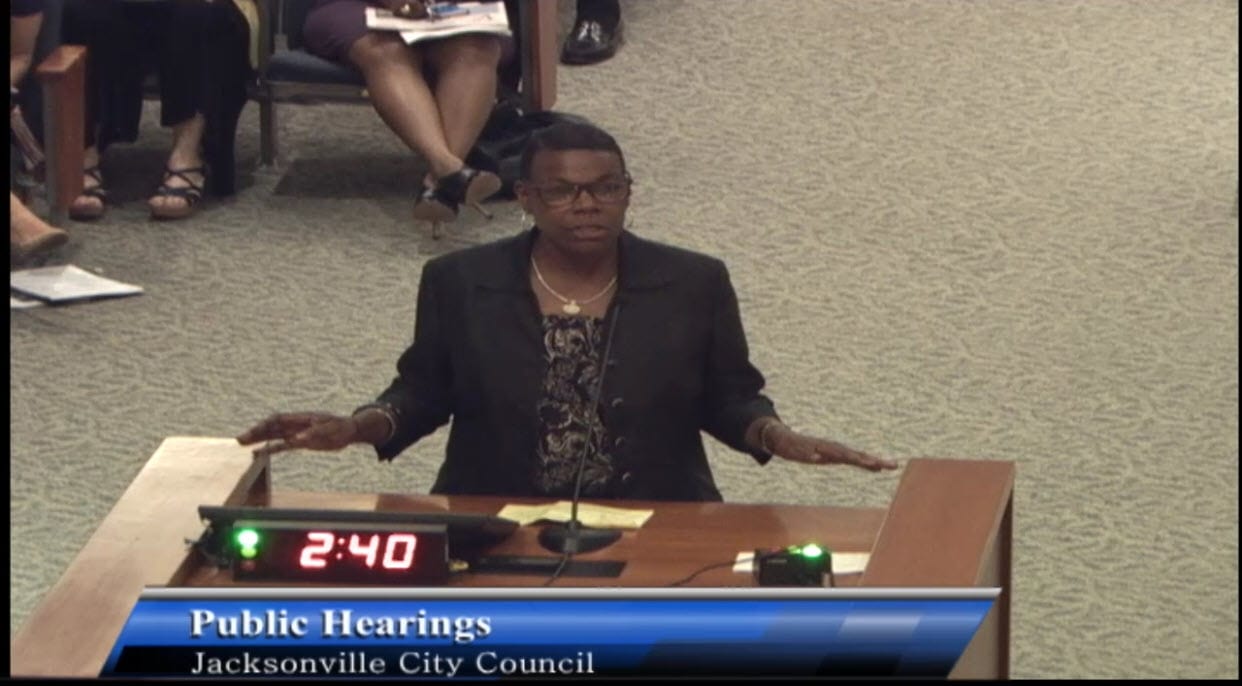 This week, Audrey Gibson gets her three minutes.

Sen. Audrey Gibson and Rep. Tracie Davis were on hand, two of the final speakers in an hourslong plea from school district employees and advocates to put a tax referendum on a November ballot.

Duval Schools wants a half-cent tax referendum this year. Mayor Lenny Curry and allies have balked, saying a special election for a tax hike is an unreasonable and costly ask.

Gibson and Davis are no friends to the Mayor, and they laid in some shots in their comments.

“It seems kind of strange for us to ask you all if we can vote,” Gibson said.

“We don’t want this to be like the JEA issue … the Hart Bridge demolition … the Jacksonville Landing demolition,” Davis said.

Curry has run roughshod over Democrats and critics, with few moves encountering resistance.

Opponents allege that the Mayor wanted to sell JEA last year, and while Curry has framed that period as a “mature conversation” about “privatization,” that’s the closest Curry has come to him taking an L in the last four years from political opponents.

Gibson, coming off a lackluster year as Minority Leader (and who barely survived a potential purge after a misstep on a bill banning anti-Semitism in Florida schools), clearly knows she needs a win.

Thus far, the opposition to the referendum has been most vocal from the Jacksonville Civic Council.

They speak with their checkbooks.

If this somehow gets to a 2019 ballot, might they spend just to teach Gibson and the School Board a lesson in how politics works in Jacksonville?

As Florida Politics first reported this week, Agriculture Commissioner Nikki Fried released the names on her newly-created Medical Marijuana Advisory Committee, which will “help improve the state’s medical marijuana policies … expand patient access, and to advance and modernize policies to move Florida into the future of medical marijuana.”

Two names familiar to Jacksonville observers made the cut. 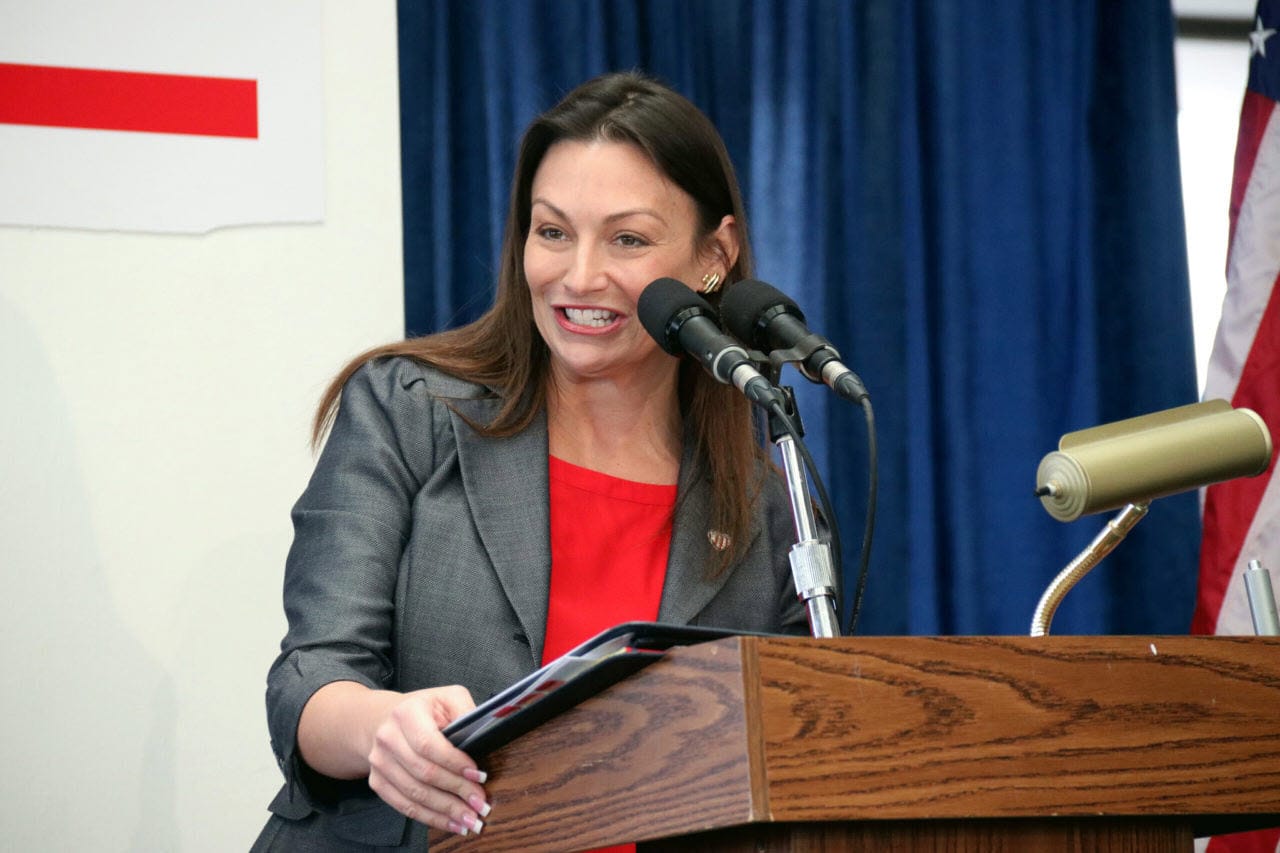 — Sally Kent Peebles. She’s a partner at Vicente Sederberg, a “national firm specializing in cannabis law and policy. She practiced with the firm in Denver before returning to Florida to open the firm’s Jacksonville office.”

— Antoinette Duncan. The president and CEO of Jacksonville’s Duncan Life Sciences “has 13 years of experience working with top pharmaceutical, medical device and cannabis companies, and is currently a member of the ASTM D37 Technical Committee for Cannabis and Minorities for Medical Marijuana.”

Per Action News Jax, Jacksonville’s Cure Violence model employs “peacemakers” to work homicide hot spots that have caused the city to have a huge year over year increase in murders. 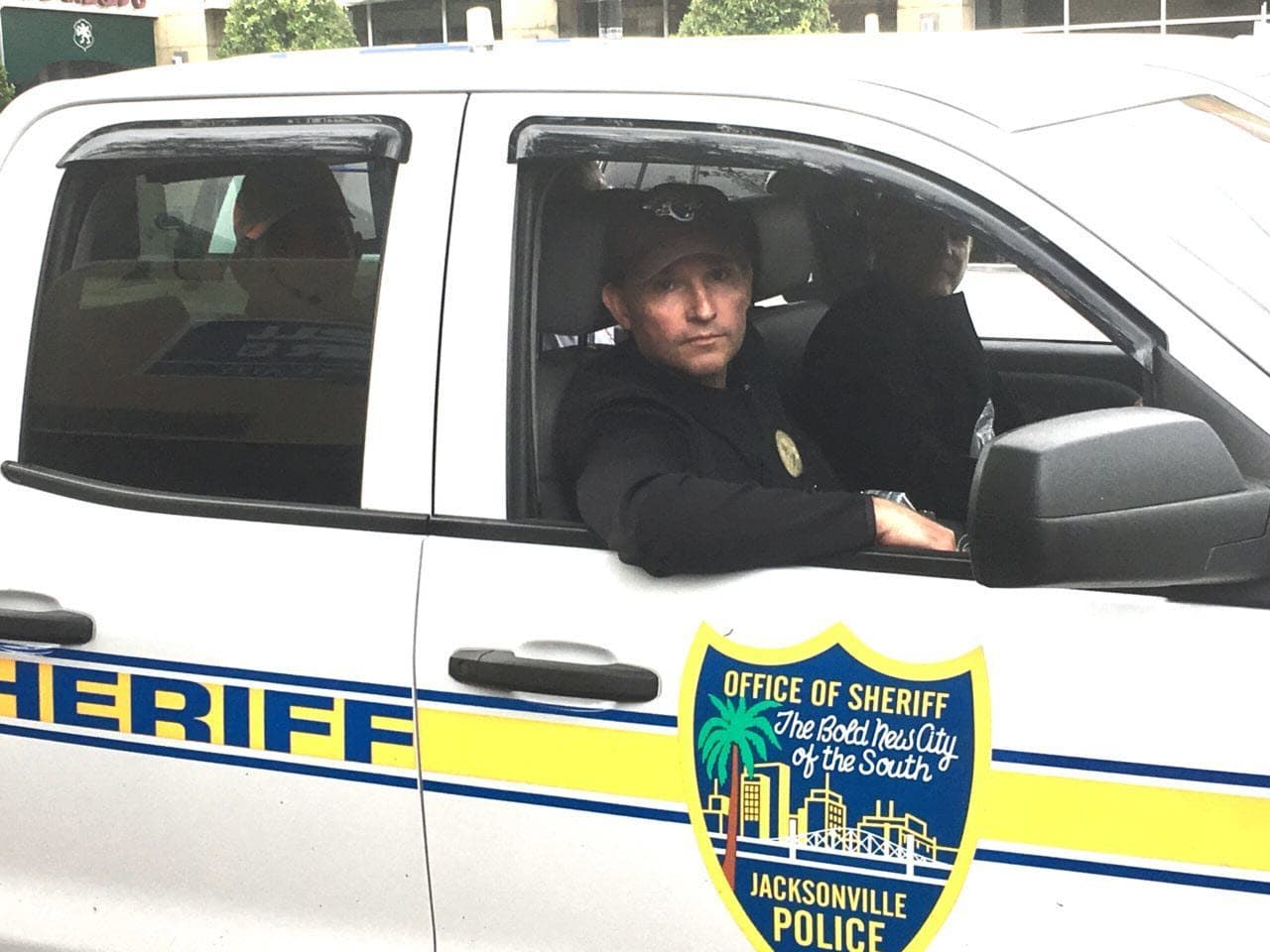 For some, this is very real.

“I lost a son to violence in this community, and I also have one in prison as a result of losing a son to violence, so this hit home to me and my family,” retired Jacksonville Sheriff’s Deputy and Peacemaker Kim Verner said.

“Many of us who are involved in this program, we assisted in destroying our communities,” peacemaker Abdul Muhammad said.

The group does not share information with the Jacksonville Sheriff’s Office, which has led to some media and community speculation that conflicts may arise during investigations.

The new class of city council members will do its business on Twitter, and reporters will be forced to write it up.

The Florida Times-Union’s Christopher Hong wrote it up, as Bold. 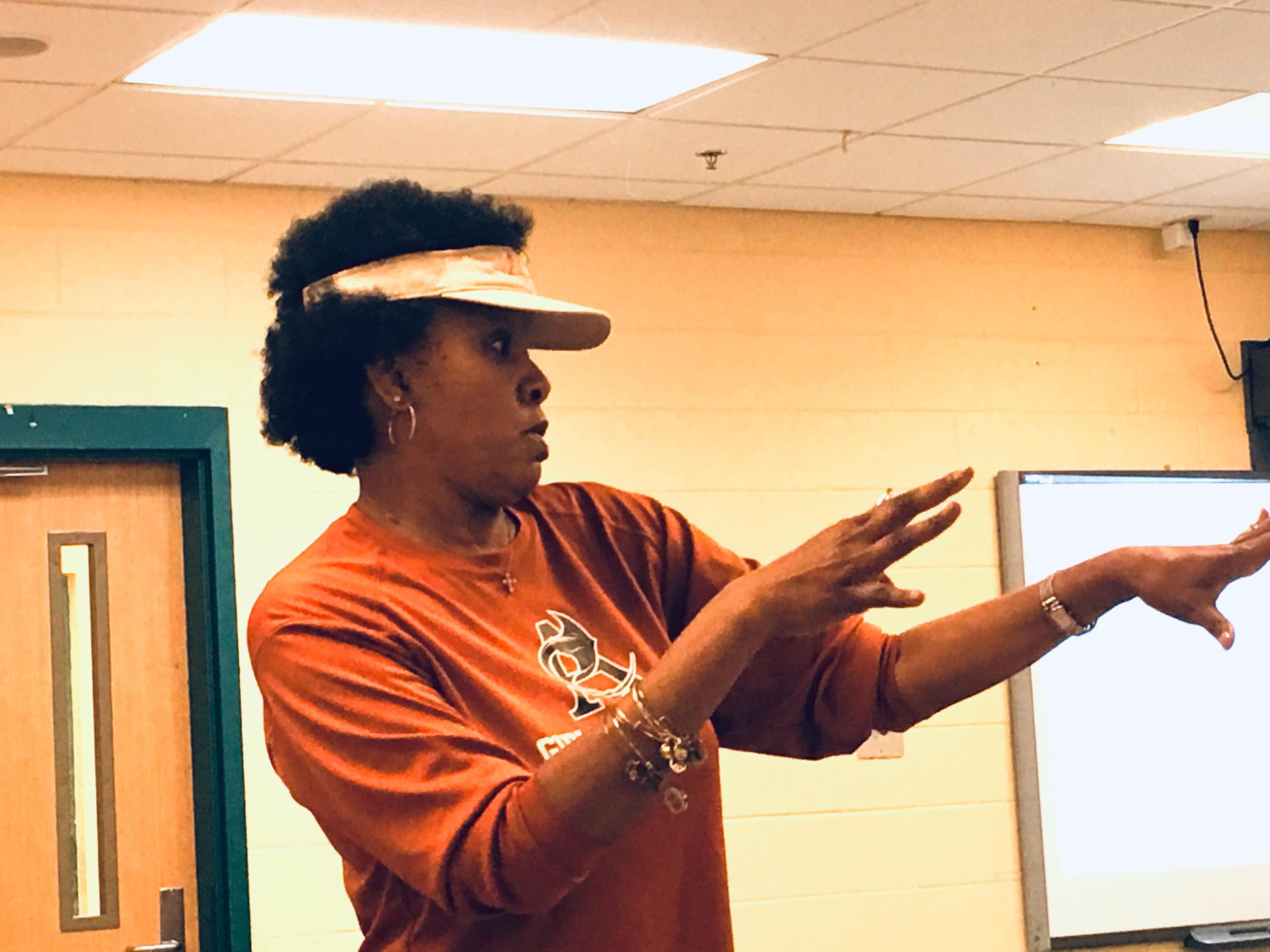 Councilwoman Brenda Priestly Jackson has yet to be seated but is making the news.

“In a sharply worded Twitter post on Friday, Brenda Priestly Jackson, a councilwoman-elect for Jacksonville’s District 10, accused Council President Aaron Bowman of discriminating against her and another African American councilwoman, Ju’Coby Pittman.”

Freeman was appointed by Gov. Rick Scott to fill an unexpired term; Priestly Jackson filed a failed legal challenge to Freeman’s residency in the district, which she claimed was a sham.

Plenty of bad blood there.

Hong saw the video, and he didn’t see much to it.

However, if this is how orientation is going, one wonders what the next four years may bring. The City Council has been a place in the last two years where people have been increasingly comfortable disrespecting each other.

Do bond rating agencies, companies looking to relocate, and so on place any weight on what is an evident interpersonal dysfunction on the Council?

Some Jacksonville residents have a problem with the city’s namesake. The Indian Removal Act and the Trail of Tears (basically, Trump-style moves of the 19th century) don’t jibe with how they would like the city to be in the 21st.

With the White House slow-walking a move to put Harriet Tubman on the $20 bill, some locals have taken to putting stickers of her likeness on public services. 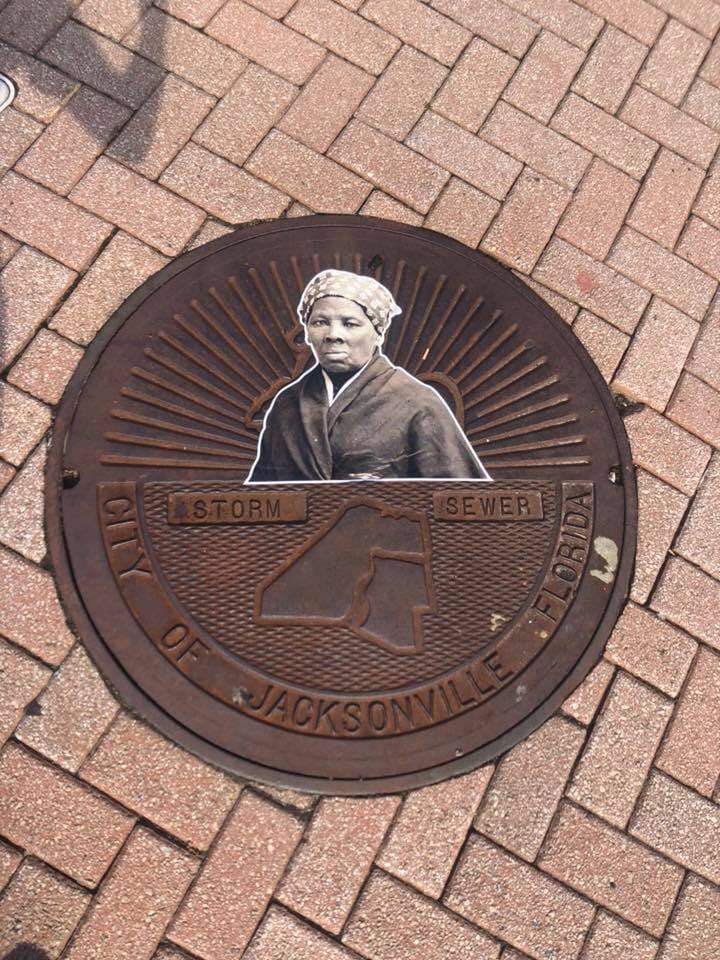 Statute bars any moves to “damage, deface or destroy any public property, real or personal …”

Tubman won’t be on currency until 2026, says the White House.

As a candidate, Trump lauded Tubman’s “great history,” suggesting that she be on the $2 bill.

WJCT has been carefully covering a Jacksonville committee dedicated to storm resiliency, and it appears wetlands protection will be among the recommendations. 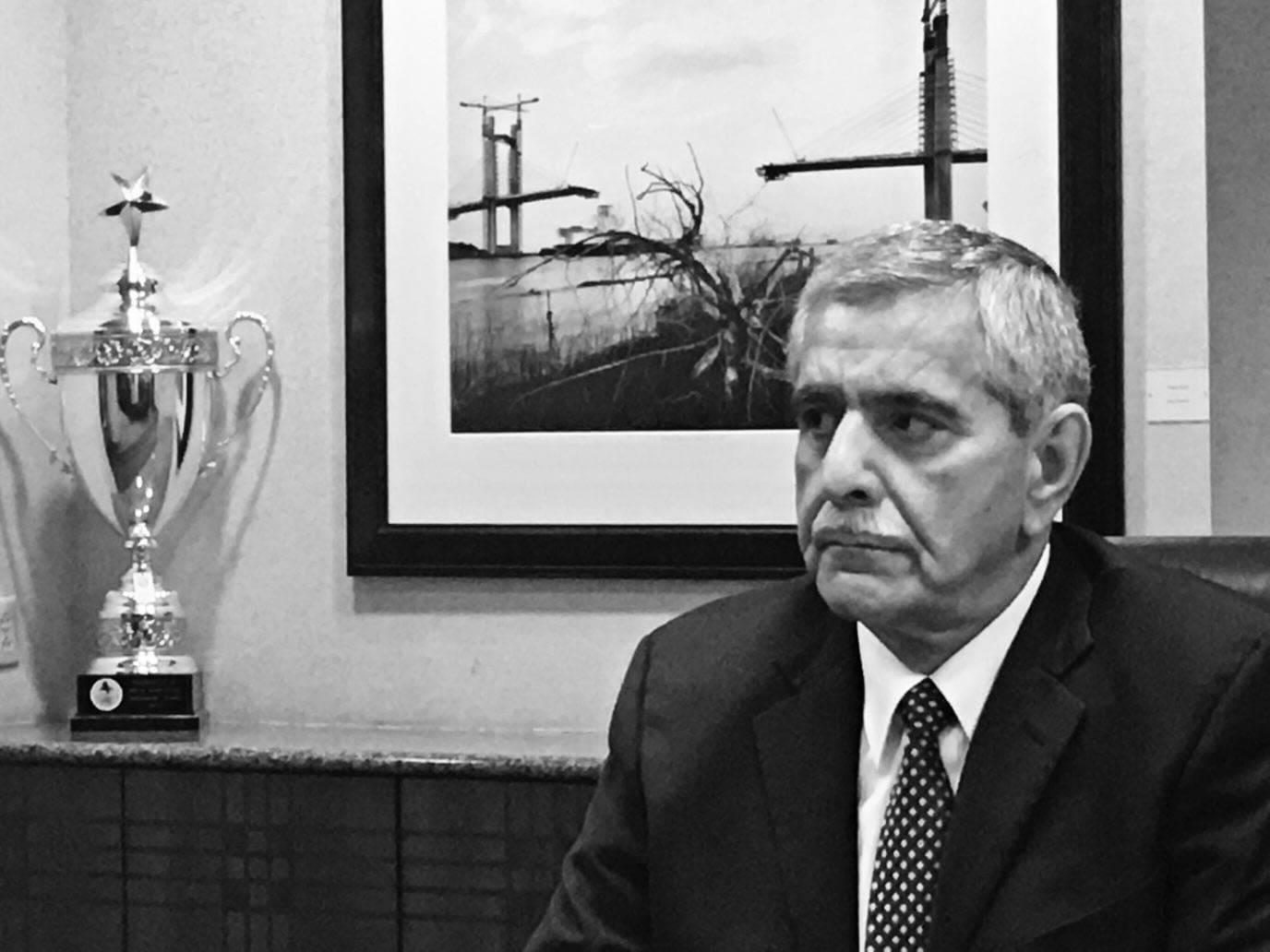 Resiliency was Sam Mousa’s watchword with this committee, as he leaves public life this summer.

“The members of the Storm Resiliency and Infrastructure Development Review Committee voted unanimously to propose an ordinance requiring developments to be an average of 25 feet and a minimum of 15 feet from wetlands, whether or not those developments are determined to have an impact on the wetlands,” the public radio station reported.

Beyond that, chairman Sam Mousa (on his way out of City Hall) said that future capital budgets would include contracting with mitigation experts for resiliency purposes.

“We are making provisions in our Capital Improvement Plan to fund the study,” he said. “We’re going to get a better handle on what we need to do to our existing infrastructure to become more resilient when it comes to storms and flooding.”

The Mayor will release his proposed budget later this summer, and more detail will emerge.

Per the Jax Daily Record … there is no housing bubble, despite prices, well, bubbling. 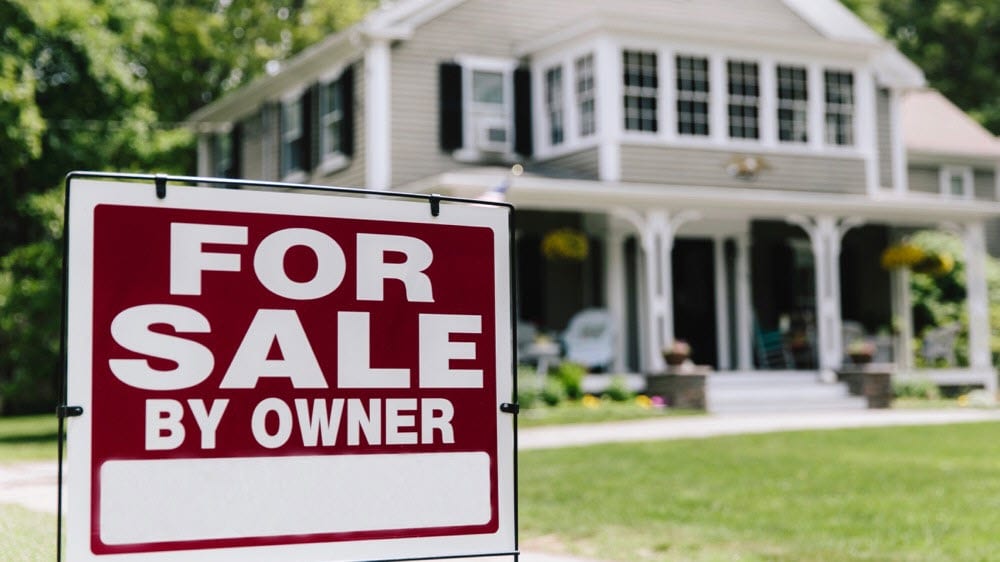 Seller’s market in Jacksonville and one reliable price range is harder to find.

“As things get more expensive, buyers are paying more and more, which means they can afford less and less, so we’re losing this very valuable $200,000 segment,” one expert said.

Longer commutes are a part of that, meaning that travel issues will be major for commuters as the market continues to boom.

He pleaded guilty to two counts and left office.

However, his story since has been a redemption tale, as Jenna Bourne of Action News Jax documented this week.

Second chance: Reggie Fullwood will use his experience to help others.

Fullwood, now the Ready4Work program director at Operation New Hope in Springfield, found that to be “a natural fit, considering my experience in the not-for-profit realm, public service and the things that I had gone through in the justice system.”

“Most of us have needed a second chance, and this is an organization that believes in that,” said Fullwood. “I’ve learned a lot about myself and just about perseverance and being focused.”

While he may never run for office again, Fullwood is still in a leadership role.

A Northeast Florida political and lobbying heavyweight quietly and without ceremony retired this week from local utility JEA.

Mike Hightower, who came aboard as JEA’s top lobbyist in 2015, saw his role expand, and ended up as Chief Public and Shareholder Affairs Officer, is out of the building now. 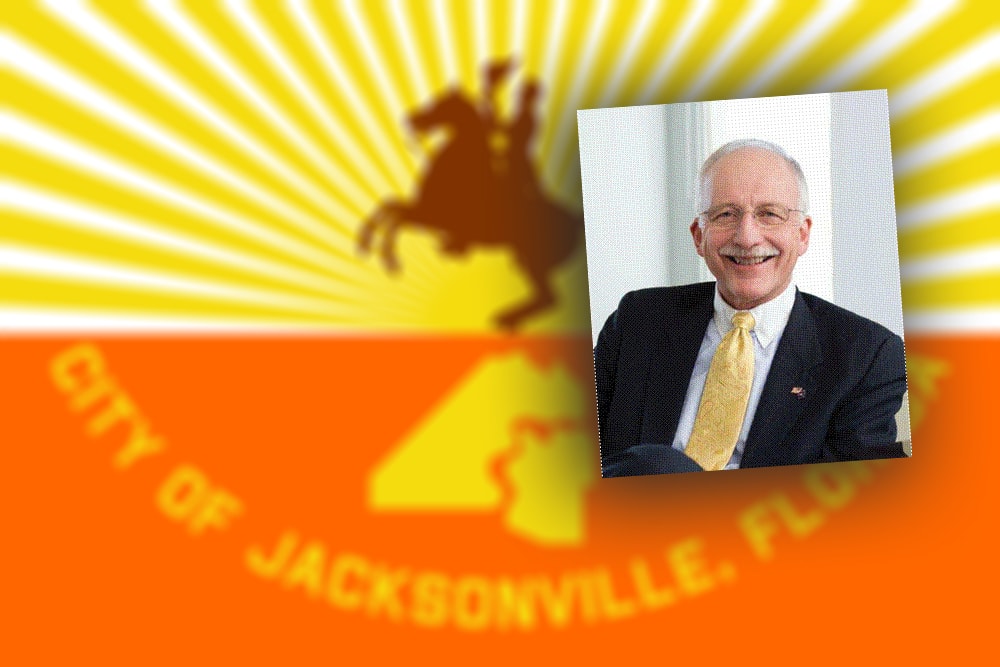 We won’t forget Mike Hightower since he won’t really be gone.

“He was instrumental in the success of recent state legislation critical to cybersecurity for municipal utilities statewide [including exemptions for] customer meter-derived data and information from public records,” Vinyard said.

Of course, there is no real retirement for someone like Hightower.

He has told some people his next move will be “getting the next Mayor ready.”

Political continuity in Jacksonville is the name of the game.

Per the St. Augustine Record, former Mayor Nancy Shaver is taking a philosophical approach to the stroke that caused her to resign months back.

Shaver, speaking to the paper from Virginia, called the ordeal a “journey.” 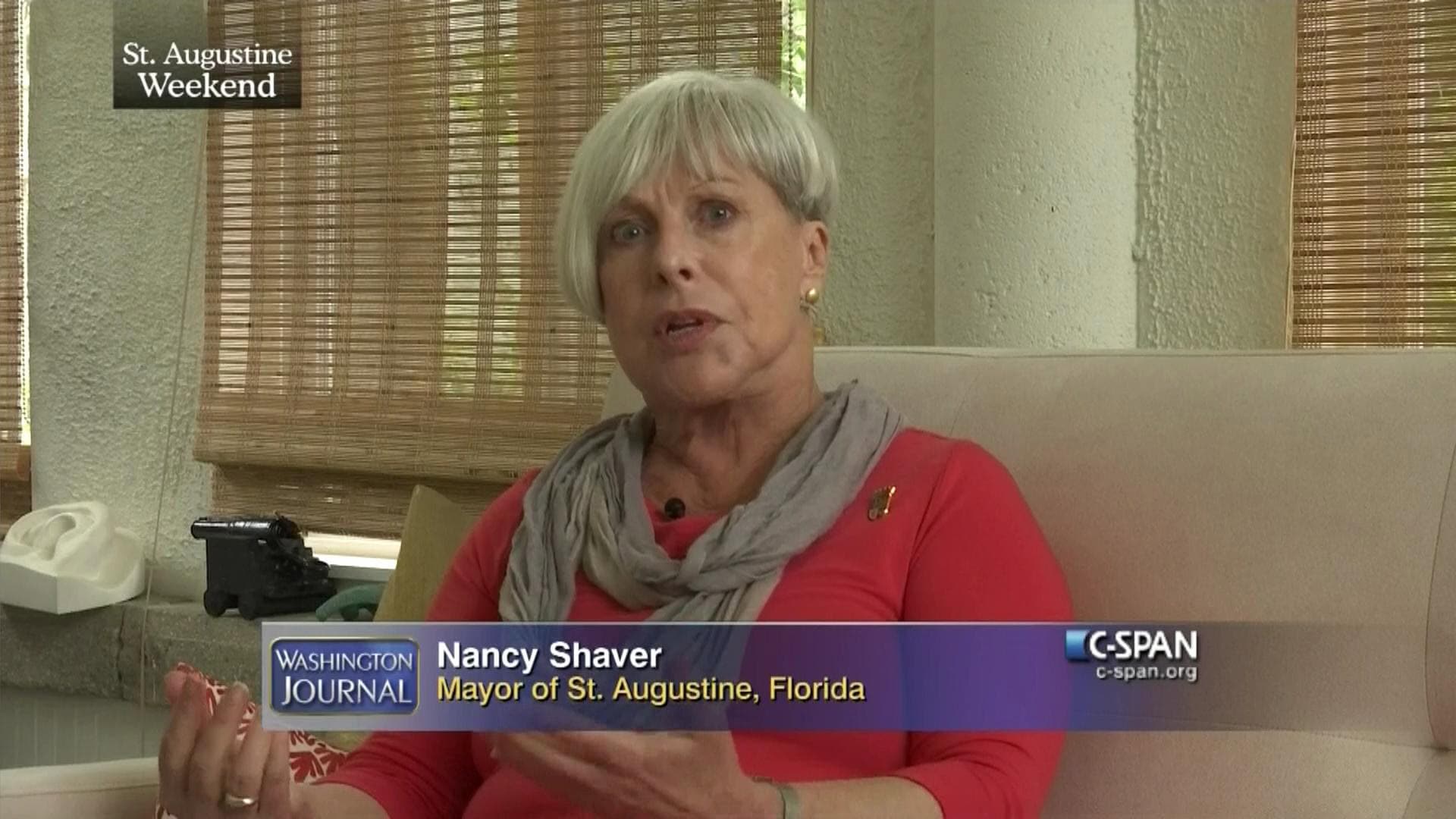 Recovery from a stroke has been a difficult journey for Nancy Shaver.

“During the Feb. 25 City Commission meeting, something wasn’t right. Shaver said she felt a little odd and couldn’t read some of the notes in front of her — they would simply disappear, she said. After the meeting, City Clerk Darlene Galambos helped her get emergency care,” the Record reported.

Recovery has been tough. She started at the level of a 4-year-old, Shaver told the paper.

“My friends have just been great, and my family and everyone,” she added. “I can’t tell you … You get these wonderful cards and thoughts, and somebody sent me biscotti.”

“In many ways, this is an absolute gift, and there’s a reason that I think God, or whoever’s directing us is — there’s more for me to do,” Shaver said. “I feel very lucky.”

Flagler Health+ is naming William L. Kopf Sr. to chair its Board of Trustees. Kopf has served the board for nearly 15 years, having previously been both vice chair and chair.

Kopf is also chair of the Information Technology/EMR Committee, is a member of the Investment & Finance Committee and served on the Flagler Health Care Foundation Board of Trustees for six years.

“Bill Kopf brings tremendous leadership, breadth of experience and a forward-looking perspective to this role,” said Flagler Health+ President and CEO Jason Barrett. “He has a genuine interest in advancing the social, physical and economic health of our communities, demonstrated by his many years of dedicated service. I look forward to Bill’s insightful leadership as we continue our efforts to build healthier communities in Northeast Florida.”

For more than three decades, Kopf held executive-level positions in the areas of operations, information technology, finance and sales with IBM. He is a graduate of Ohio State University and the Tuck School of Business at Dartmouth.

Kopf succeeds two-term chair Matt Baker, who has been a part of the Flagler Health+ Board for nearly 14 years.

Also, the board named Todd Neville as vice chair of the Board of Trustees. Neville has been an active member of the Flagler Health+ Board for nearly a decade and is very active in the community, most notably as Vice Mayor of the city of St. Augustine.

The event was attended by people throughout Jacksonville media (Bold, involved in a massive home renovation, did not attend).

Intra-media marriages are not unheard of in Jacksonville television, of course. But this one, with reporters working for competing stations, may be a first.

Also a first: A quasi-proclamation from the Mayor’s Office.

With TV veteran Nikki Kimbleton running the press shop, it is clear that there has been some message refinement. Curry took two of the stronger reporters in the market and made a classic relationship building move.