Between a Tuesday night “visitation” and a Wednesday “celebration of life,” over a thousand people came out to pay respect to the late legal titan and former Florida State University President, Talbot “Sandy” D’Alemberte. 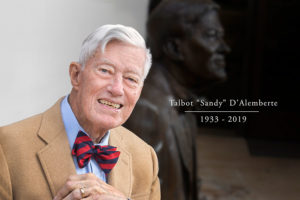 D’Alemberte, in a photo illustration by FSU

A memorial service was held Wednesday for the lifelong attorney and “Southern gentleman” in the Ruby Diamond Concert Hall on FSU’s campus in Tallahassee.

His wife, journalist turned lawyer Patsy Palmer, recalled how D’Alemberte would “smile in his sleep,” but would also cry out — he long suffered pain from a motorcycle accident years ago.

Still, he “stood for hours on graduation stages … and for his last oral argument barely three months ago,” she told the audience.

His favorite dream was flying — that’s when solutions to problems would come to him, Palmer said.

During the day, he dreamed of “a more just society and a healthy environment for his grandchildren to grow up,” she said, mentioning his longstanding commitment to free legal services and human rights.

“But he never felt he could do enough,” she added. “… People keep asking me, ‘What will we do without Sandy?’ ” Her answer: Don’t let Sandy’s dreams die with him.

His son, Joshua D’Alemberte, later said of his father that “people often compared him to Atticus Finch (of the novel and movie ‘To Kill a Mockingbird’), but Atticus Finch was half the man my dad was.”

As the university described him, the “brilliant legal mind and international champion of human rights” passed away May 20 at the age of 85. He was president of the university 1994-2003, dean of its College of Law 1984-89, and a law professor throughout his life.

He was the driving force behind the creation of FSU’s College of Medicine, current President John Thrasher said, and the university’s Center for the Advancement of Human Rights, which represents human trafficking victims, among other causes.

Among many other accomplishments, D’Alemberte served in the Florida House 1966-72, representing a Dade County district; chaired the Florida Constitution Revision Commission in 1977-78; and completed a term as president of the American Bar Association in 1991-92.

Gov. Ron DeSantis, as a “symbol of respect,” ordered flags at half staff Wednesday at Tallahassee City Hall, the Leon County Courthouse and at the Capitol to honor D’Alemberte’s memory.

He received the ABA Medal, the association’s highest honor; one of his legacies was creating a kind of legal Peace Corps for other countries, according to Mark Ellis of the International Bar Association.

And Jim Apthorp, chief of staff to Gov. Reubin O’D. Askew, recalled how D’Alemberte once expressed an interest in running for Governor and asked him to be his Lieutenant Governor. They were talked out of it, he said, tongue in cheek.

Apthorp also mentioned D’Alemberte’s brief flying career, which ended in a minor crash in a cypress swamp. D’Alemberte took up birdwatching instead, he added, once identifying 90 species of birds on one excursion.

Thrasher, wearing one of D’Alemberte’s trademark bow ties gifted to him by Palmer, offered the only “criticism.” It was D’Alemberte who nominated Thrasher to be president in 2014.

“He set the bar for being FSU president so high,” Thrasher said.